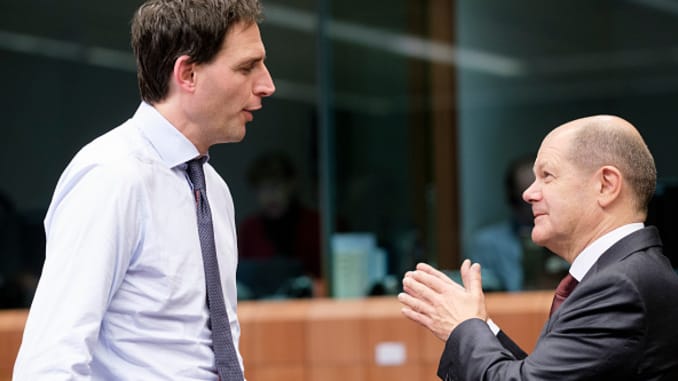 Explainer: What’s at stake at tonight’s Eurogroup meeting (starting at 5pm) to decide the EU/eurozone recovery package in response to the corona-economic crisis.

The Eurogroup (eurozone finance ministers) met for 16 hours on Tuesday without reaching agreement. There are two main points of contention: the creation of a common debt instrument (coronabonds) and the use of the existing bailout fund, the European Stability Mechanism (ESM), which has €410 billion.

The ESM is a fund that makes loans, conditional on “structural reforms” and harsh austerity à la the Troika bailouts. Eurobonds have long been proposed as a solution to eurozone divergence but were shot down by Germany and others during the sovereign debt crisis.

The basic concept of the Eurobond is that an EU instrument would pool the issuing of government debt by the members of the common currency. All of the debt would be rated equally, and would not be on the member states’ books. This would lower borrowing costs for the so-called periphery but reduce the privilege of the core.

Despite the common currency, the bond market has treated the bonds (debt) issued by different eurozone states as very different. During a crisis, capital flees the risky states and flows to the “safe” bonds, namely German bunds.

If the sovereign bond market doubts the ability of high-debt states to repay their debts, the market will “price” the debt higher with a risk premium – applying much higher interest rates to these governments and even denying them access to the market.

This is what happened during the eurozone debt crisis, causing the bankruptcies & Troika bailouts. An important note here: states that have their own currency do not need to consider such a problem because their currency will be backed up by their own central bank, and they cannot go bankrupt.

This position is supported by the ECB, which (correctly) has stated that the monetary and fiscal response to the crisis need to be combined and coordinated. The ECB has said a fiscal intervention of  €1.5 trillion will be needed in the EU in 2020 (likely an underestimation).

The Netherlands has strongly come out against coronabonds, backed by Germany, Austria and Finland, the so-called “Frugal Four”. The obnoxious Dutch position is making headlines but as always, the German position is key.

The best-case scenario for a coronabond is one issued by the European Investment Bank, unlimited and unconditional, guaranteed by the ECB. The ECB is the only institution with the power to back the spending necessary to deal with this crisis.

While the ECB is prohibited by the Treaty (Articles 123 and 125) from directly financing governments, it is permitted to make purchases from the EIB, a public bank.

But the benefits of a coronabond depend entirely on its design. It could be designed to allow governments to borrow at low costs and keep this debt off their balance sheets. Or it could be designed with the usual EU austerity conditions attached (and/or to be “securitised”).

The French compromise going into Tuesday’s Eurogroup meeting was for a new fund to “issue bonds with the joint and several guarantee of EU Member States”, to be operated by the Commission and guaranteed by a new resource such as a “solidarity tax”.

Germany and France have reportedly now agreed not to include this in the text. So, if media reports are correct, coronabonds are off the table and the debate is now only on the conditions to be attached to the use of the ESM (though France may lead the nine willing states in setting up a common bond between themselves).

Leaving aside the repugnant nature of the ESM in general, even from the EU leaders’ own criteria it is entirely unsuited to this situation. It was designed to provide conditional credit lines to member states facing an asymmetric shock, who can’t borrow in the markets.

The Commission’s ‘non-paper’ leaked before the Eurogroup meeting proposed two new ESM instruments, a Pandemic Crisis Support Enhanced Conditions Credit Line (ECCL) of up to 2% of a member state’s GDP and a Rapid Financing Instrument (a smaller fund of €80 billion).

Both ESM instruments have conditions attached, that they are only to be used for health & economic emergency spending, & states must adhere to the fiscal rules. See the proposal here.

The substantial credit line (ECCL) proposed conditions are ensuring “respect of EU fiscal rules and European Semester… with this commitment to be laid out in a “Memorandum of Understanding, which would be based on common terms for all Members”.

It’s similar wording for access to the rapid financing instrument. The generous gift of the northern states is to include a reference to “any flexibility applied by the competent EU institutions” to the EU fiscal rules (the Stability and Growth Pact rules have been temporarily suspended).

Remember, the SGP rules apply to annual deficits (to be kept below 3% of GDP) AND to accumulated debt (to be kept below 60% of GDP). When the rules apply again post-crisis, high-debt states will be in a permanent debtors’ prison, forced to implement the inevitable austerity the Commission will demand.

Reportedly, the key remaining sticking point is that Italy wants the reference to a Memorandum of Understanding to be removed and the Netherlands refuses.

The Dutch government also opposes including a reference to “innovative financial instruments”, a vague reference to the future possibility of coronabonds agreed on by most states.

At this stage it appears that France, Italy, Spain and the other signatories to the letter calling for coronabonds are prepared to give up on all of their demands in exchange for the removal of the term “memorandum of understanding”.

To summarise: The Eurogroup is right now in a vicious fight over a LOAN from the bailout fund that will add to government debt, increase borrowing costs on the market, need to be repaid, and inevitably have austerity conditions attached.

The immediate fallout from this farce will be political. The southern states asked for solidarity in the midst of a horrific pandemic and had the door slammed in their faces by Germany, the Netherlands, Austria and Finland.

The longer term implications will be both economic and political. It is no exaggeration to say this week is a defining one for the future of the common currency and for the EU. What’s the point of the euro and the EU?

It is crystal clear that direct monetary financing of government spending by the ECB is the answer. All of these limitations are ideological and self-imposed.

Governments should refuse to use the ESM, borrow what they need on the market in the expectation that the ECB will purchase their bonds, and demand that the suspension of the Stability and Growth Pact is permanent.