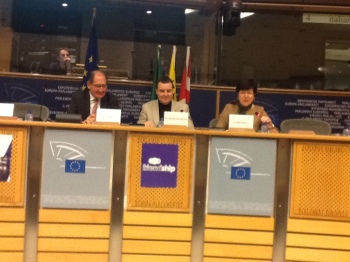 South African lawyer and conflict resolution expert Brian Currin was the main speaker at a conference held in the European Parliament in Brussels on 24 March to mark five years since the ‘Brussels Declaration’ was made in support of building a peace process in the Basque Country.

The conference was organised by the Basque Friendship Group, which includes MEPs from across the political spectrum in the European Parliament, and was introduced by New Flemish Alliance representatives Mark Demesmaeker MEP and former MEP Frieda Brepoeles.

The event ended with the launch of an international campaign for the release of jailed Basque pro-independence leader Arnaldo Otegi and for the repatriation of Basque prisoners to the Basque Country.

In her opening remarks, Brepoeles described the Brussels Declaration, a statement made by a group of 21 international conflict resolution leaders including several Nobel Prize winners, as “an indisputably pivotal moment”.

“From that point, the international community organised to take initiatives in support of the peace process. Among the Basque people, the belief in a durable peace grew. Madrid appears to fear an outbreak of peace. But pessimism, for us, is not an option,” she said.

Demesmaeker outlined his view that the role of the European Union in the final resolution of the long-running Basque conflict was to pressure Spain and France to end the current stalemate in what has been, to date, a one-sided peace process.

Brian Currin was the driving force behind the Brussels Declaration in March 2010. He was then instrumental in establishing the International Contact Group – a group of high-profile conflict resolution experts from around the world – in November that year in order to help promote a peace process in the Basque Country.

“In January 2011, ETA responded positively and announced just that – a permanent and verifiable ceasefire. We, the International Contact Group, assumed that the Spanish and French governments would be part of any verification body. It was incomprehensible to us that they would choose not to be part of such a process.

“We established an independent international verification body of conflict resolution experts, the International Verification Commission (IVC), and in the process we approached Madrid and Paris. They didn’t respond. To this date we have had no support for the disarmament process from either government.”

A definitive end to armed activity

The next milestone in the current peace process, Currin told the conference, was Declaration of Aiete, made on 17 October 2011.

The Declaration consisted of five recommendations that called on ETA to implement a definitive cessation of armed activity and request negotiations with the Spanish and French governments; and urged the governments to respond positively to such a request and put in place a process of addressing the consequences of the conflict. three days later, ETA announced a “definitive cessation” of armed activity.

“The key goal of the Aiete Declaration, in addition to obtaining a verifiable commitment to the definitive end of armed activity from ETA, was for the Spanish and French governments to enter dialogue with ETA – exclusively on dealing with the consequences of the conflict,” Currin explained.

“I stress this word, exclusively – the call was not for the Spanish and French governments to enter into political talks about the future of the Basque Country, the constitution, or any issue other than dealing with the key consequences of the conflict that lasted for five decades.

Addressing the needs of victims

“There are three main consequences that I believe need to be dealt with in order to build a lasting peace in the Basque Country – victims, disarmament and prisoners.

“Notwithstanding the failure of the two governments to move on the issue of disarmament or prisoners, a great deal of excellent work has continued in the Basque Country in recent years on the sensitive and moving issue of victims.

“Basque organisations and the Basque Government [the government of the Basque Autonomous Community] have worked tirelessly to try to move this forward. So a lot of work on the issues of victims and reconciliation is taking place – but it needs institutional support from the Spanish and French governments.”

“ETA has been unequivocal in putting its arms beyond use,” Currin said.

“It has made commitments and kept them, and it has put a quantity of its weapons beyond use through the IVC in February last year.”

For their efforts, the IVC members were summoned to appear before the special Spanish court, the Audiencia Nacional, for questioning.

“For this process to be carried out properly, it needs the cooperation of the Spanish government. It needs to involve official security personnel,” he said.

“Madrid’s approach has been to say, ‘hand over the weapons to us’. But it’s not that simple. These arms may be associated with individuals who are still in exile or being sought by Spanish authorities who would be targeted. What the Spanish government is asking for amounts to a surrender in the eyes of ETA.

“But the issue must be dealt with, and it cannot be dealt with by the international community alone. The fact is there are arms in caches in Spain and France and they need to be identified and destroyed. International actors, were they to enter the Spanish state and carry this out, would be engaging in a major crime under Spanish law.

“Can you imagine if, anywhere else in the world, a group that had been engaged in an armed campaign against the State for decades announced that it wanted to disarm, and that government refused to engage with a disarmament process?

“It would be considered to be outrageous. A solution to this stalemate needs to be found, and key to this will be the international community – particularly the EU – putting pressure on Spain and France to engage positively in decommissioning.”

Political prisoners are the key to achieving peace

Currin said that in his experience, “in every peace process, resolving the status of politically motivated prisoners is the key”.

“It cannot be overstated. This has been true for all the peace processes I have been involved in, in the Basque Country, in Northern Ireland and in South Africa.

“When I began working in the Irish peace process in the 1990s, I was engaging with both republicans and loyalists on the issue of prisoners. Soon, the British government asked me to chair their prisoner early release commission – something that showed significant political maturity on their part.

“The issue of political prisoners, again, needs to be dealt with institutionally. Before we even begin addressing the issue of early release, we need to insist that the exceptional punitive measures used against Basque prisoners come to an end.

“The words the Spanish government is asking Basque prisoners to say in order to end the exceptional measures used against them are deliberately designed to ensure the prisoners cannot say them. They’re being asked to reject everything they’ve been involved in, their beliefs and their actions. And the prisoners are not prepared to do that.”

“But now,” he said, “I am going to be an activist again for the next five minutes to speak about an issue that I feel very strongly about, and that is the dispersal of Basque prisoners.

“Dispersal is a rather innocuous word. Is it the right word to use in this context, to convey the consequences of the policy? I don’t think it is, when I think about the policy of dispersal and what it does.

“Today around 500 prisoners are ‘dispersed’ hundreds and hundreds of kilometres away from their homes and their families. Think for a moment about the impact this has on these families – the husbands, wives, parents, grandparents, brothers, sisters and close friends of these prisoners.

“Every weekend, you drive for hours and hours; maybe it will take you 10 hours to get to the jail. You have a 40-minute visit in the jail with your relative and then you drive back. Think of the cost in terms of time and finances, and think of the emotional distress this would result in. You would almost want to forget this family member. But you can’t, and you won’t. And you will make the journey each weekend.

“If we consider that there are 500 prisoners held under this policy, I would estimate that this affects around 50,000 people in the small Basque community – around 10 people per prisoner if you take into account siblings and grandparents.

Europe has a responsibility to help break this deadlock

“And it is completely illegal. It is a violation of the European Convention on Human Rights and the Spanish government’s own Constitution. It is absolutely incredible that this is happening right here in the centre of ‘civilised’ Western Europe.

“It reminds me of the colonial days when prisoners were sent to faraway islands to make sure they lost touch with their families and communities as a punitive measure. It was a policy carried out by Spain, France, Britain, the Netherlands and other European colonial powers.

“This is happening today in Spain and France when there is no threat of violence whatsoever from ETA. What can justify the dispersal of prisoners in this way, other than simply revenge and spite?

“It is utterly inhumane and it is affecting 50,000 people in the Basque Country. We should not call this dispersal, we should call it what it really is – 21st century Spanish colonial penal policy for the destruction of Basque families. As we sit here now, it is destroying families.

“There must be a way in which the European institutions can play a role in facilitating the end of the mistreatment of Basque prisoners, and the decommissioning of ETA’s arms, and to break through the current deadlock caused by the failure of the Spanish and French governments to engage.

“I cannot accept that there is not a way for these institutions to assist this process and put this conflict in the past for good. That is our challenge – to find a way.”